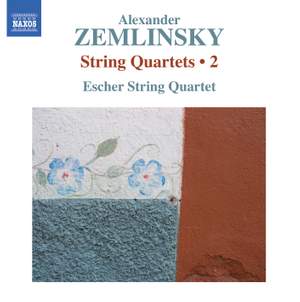 the Eschers take the music by the scruff of its neck, playing with tremendous virtuosity and subtlety of nuance. Recorded in first-class sound, they hold the listener spellbound from first bar... — BBC Music Magazine, September 2014, More…

By 1896, at the age of twenty-five, Alexander Zemlinsky was one of the rising stars in the Viennese musical firmament. His first opera had been written, he had won a number of awards, and he had earned the support of Johannes Brahms. In july of the same year he began writing his first string quartet, a work of sweeping lyricism, rich dance patterns, and self-confidence, couched within the bounds of a relatively conventional palette. Seventeen years later he began his second quartet; kaleidoscopic in effect, mood, and technical demands, and redolent of the music of the new century – led by his brother-in-in-law Arnold Schoenberg – it was to place Zemlinsky securely in the European avant-garde.

the Eschers take the music by the scruff of its neck, playing with tremendous virtuosity and subtlety of nuance. Recorded in first-class sound, they hold the listener spellbound from first bar to last. Overall, this recording is a tremendous achievement by any standards.

Both are likeable pieces with one foot in the future, the Escher Quartet on this new recording alert and responsive...a performance that probes the depths and surges forwards with a sense of inevitability that, given what the century had in store, is 'authentic' in the truest possible sense.

a superb performance of the Second Quartet, one of Zemlinsky's greatest and most radical achievements...The Eschers sustain the huge span of music magnificently, while making sure that every tiny detail of Zemlinksy's meticulous string writing is heard.