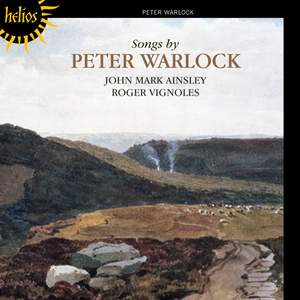 Warlock: The Wind from the West

Warlock: To the Memory of a Great Singer

Warlock: As ever I saw

Warlock: The bayley berith the bell away

Warlock: There is a lady sweet and kind

Warlock: In an Arbour Green

I. I held love's head

II. Thou gav'st me leave to kiss

I. A prayer to St Anthony of Padua

III. My own country

Philip Heseltine was born in London in 1894 and in his short life won public acclaim for the songs he wrote under the pseudonym Peter Warlock. He was particularly noted for his settings of sixteenth- and seventeenth-century texts, and brought the most delicate sensibility of the music of that period to his compositions. Warlock was considered an authority on Elizabethan music and in the course of his life he edited over three hundred Elizabethan and Jacobean lute songs for voice and keyboard or for choir.

Rarely can these works have been so beautifully and movingly performed on record as in this celebrated album, featuring John Mark Ainsley at the peak of his considerable powers, perfectly accompanied by Roger Vignoles.

Whether you collect tenors, English music or simply good singing, don’t be without this

Singer and song are ideally matched, pianist and piano part likewise, and the shade of Philip Heseltine should gain contentment