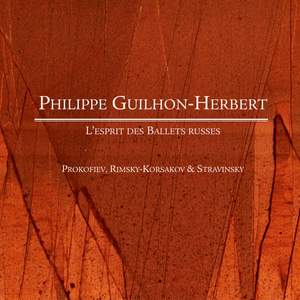 1. Waltz. Cinderella and the Prince

6. The Montagues and the Capulets (Dance of the Knights)

10. Romeo and Juliet Before Parting

Rimsky Korsakov: Scheherazade, Op. 35 (Version for Piano by the Composer)

1. The Sea and Sinbad’s Ship

If the Russian Sergei Diaghilev set up Les Ballets russes, Paris was the theatre of the company's immense success. Diaghilev revealed Mussorgsky, Rimsky-Korsakov, Stravinsky or Prokofiev to French and European audiences – alongside Debussy, Ravel, Satie, Milhaud, and Poulenc.

Philippe Guilhon-Herbert proposes in his first solo album a genuine choreography in sound, with two extraordinarily lyrical frescoes by Prokofiev: first 'Cinderella', then 'Romeo and Juliette' – a ballet naturally darker and more tragic. Both works provide a framework for the Oriental fragrances of Rimsky-Korsakov's 'Scheherazade', and the sarcasm and irony of 'Petrushka'.