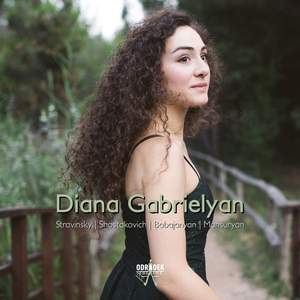 Throughout she displays a clear, delicate touch, and a refusal to grandstand even when the virtuoso nature of the music invites it. The varying moods of the fascinating Sonata Op. 11 by Shostakovich... — BBC Music Magazine, August 2014, 4 out of 5 stars More…

VI. Dance of the Sasun People

With this record pianist Diana Gabrielyan explores the musical richness of the 20th century in Russia and her native Armenia from two separate historical periods: post-World War I, with sonatas by Stravinsky and Shostakovich, and post-World War II, with the compositions by Babajanyan and Mansurian. She says: “Though characterized by strong internal contradictions, almost diametrically opposed to one another, and spanning compositional languages from neoclassicism to serial and 12-tone technique, they somehow manage to represent different aspects of a single reality: man always looking for a better world.”

The purity and the intellectual elegance of Stravinsky’s neo-classical sonata lead us to an ideal world is shattered by Shostakovich’s sonata, a work with a revolutionary spirit and musical portrait of the Great War, with strong harmonies and dissonances pushed to the extreme. Arno Babajanyan’s pieces are music of Diana’s heart and soul. Despite employing 12-tone method, Babajanyan “conjures pictures that are purely Armenian, confirming the evergreen spirit of a thousand-year-old people”. The disc concludes with Tigran Mansurian’s Three Pieces, “a fantastic journey into a mysterious and infinite universe, where every note is a shining star”.

Pierre Petit wrote in Le Figaro: “At the age of 13, Diana Gabrielyan shows overwhelming presence, passion and sense of style”. Born in Yerevan, Armenia, she began her musical studies with her mother, and gave her first solo recital in the Aram Khachaturian House-

Museum aged nine. She has lived in Italy since 1998. She graduated with distinction from the S. Cecilia Conservatory, Rome, receiving a special prize for the best degree in Rome in 2005. The winner of many national and international competitions, including the first prize at the “International Young Talents Competition”, she performs extensively, participating in festivals and playing in venues such as the Rome Opera House, the Malibran Theatre in Venice, the Unesco Salle de Cinema, and Citè des Arts in Paris. Since 2010 she has been studying at the prestigious International Piano Academy in Imola, under the supervision of M° Boris Petrushansky. This is Gabrielyan’s international recording debut.

Throughout she displays a clear, delicate touch, and a refusal to grandstand even when the virtuoso nature of the music invites it. The varying moods of the fascinating Sonata Op. 11 by Shostakovich come to vivid life under her hands...but it's the clutch of pieces by Stravinsky which really reveal her musical intelligence.

She opens with the second of Stravinsky's sonatas...And if her performance is less spiky than some, it is more musicianly than many...Odradek admirably reflects performances that are fleet and elegantly proportioned.