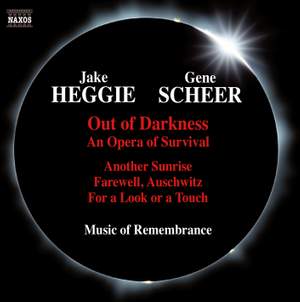 Heggie: Out of Darkness

I. Prologue: For Maria

IV. In The Cards

VII. The Sun and the Skylark

Heggie: For a Look or a Touch (song cycle version)

IV. The Story of Joe

In Out of Darkness, Jake Heggie and Gene Scheer accomplish something remarkable. They convey the vastness of the Holocaust’s scope through emotionally rich portraits of those caught in its grasp, without reducing them to caricatures of martyrdom. The three chapters of this work relate stories that offer compelling musical witness to survival in the face of unimaginable adversity. Another Sunrise tells the amazing story of Krystyna Żywulska who, after being captured as a member of the Polish resistance, created poems and songs in Auschwitz that circulated secretly and became anthems of defiance amongst her fellow prisoners. Farewell, Auschwitz adapts Krystyna’s lyrics, with their exhortations to preserve a sense of humanity in a place defined by inhuman behavior. The deeply-moving song cycle For a Look or a Touch illuminates Nazi persecution of homosexuals, informing historical realities through an intensely intimate story of memory and loss.