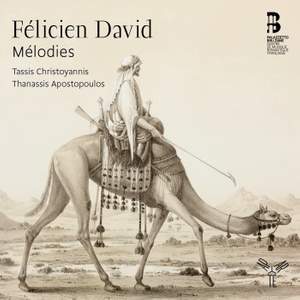 ‘Here are three more songs by M. Félicien David, the composer of the odes-symphonies who, despite his attempts and successes in the grand genre has all the requirements, by the very nature of his talent, to produce these small sparks of music that scintillate in our salons.’ (Revue et Gazette musicale de Paris, 12 September 1847)

Félicien David (1810–1876) an orphan, trained at the choir school of St Sauveur Cathedral in Aix-en-Provence. After meeting the painter Pol Justus in 1831, he joined the Saint-Simonian movement and became its official composer. When the community led by Père Enfantin (1796–1864) was disbanded by government order the following year, David left France with a group of friends to spread the Saint-Simonian gospel in the East, a journey that took him to countries including Egypt and Algeria.

His art songs for voice and piano, most of which were published between his return from Egypt (1835) and the end of the July Monarchy (1848), belong to a genre that was then undergoing substantial change. Like Berlioz dreaming of England, Félicien David speaks of North Africa and the Middle East using a French musical language of Viennese inspiration.

Indeed, we find not only harmonic patterns characteristic of Schubert, but also, at the same time, the melodic sweetness that has been a typical feature of French music since the 17th-century air de cour. All of Félicien David’s art songs show an innocence that Berlioz and Saint-Saëns saw as their finest quality, as well as a simplicity that favoured their success by making them accessible to all.

Regarded as one of the finest baritones of his generation, admired for his acting skills and his musicality, Athens-born Tassis Christoyannis studied piano, singing, conducting and composition at the Athens Conservatory, before going on to specialise in the Italian repertoire with the baritone Aldo Protti.

He sings the principal baritone roles in Italian, French and Russian works at opera houses and festivals all over Europe, including Paris, Vienna, Berlin, Geneva, Glyndebourne, Brussels, Amsterdam, Strasbourg, Bordeaux, Frankfurt. Tassis Christoyannis is also much in demand for his skills as a song recitalist.

Both voice and instrument face a wide range, served well by both artists … admirably sung.