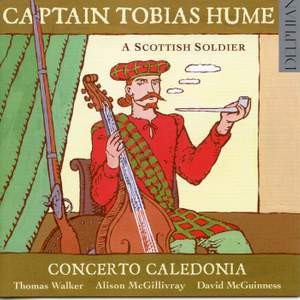 Hume, T: Fain would I change that note

Hume, T: Be merry a day will come

Hume, T: Tickell, tickell - I am falling - Tickle me quickly

Hume, T: My hope is revived: The Lady of Suffolkes delight

Hume, T: The Spirit of the Almaine

David McGuinness and his virtuoso band of early musickers voyage once more into musical history, and this time the object of their exploration is Tobias Hume, about whose life we know very little. (David’s engaging essay tells us as much as there is to know.) The best guess for Hume’s birthdate could be any time from 1565 to 1579, and the materials documenting his appearance on the fringes of the London musical scene from around 1605 are sparse.

This recording draws on the two books of music Hume published in his lifetime, and ranges from capricious fragments of tunes that celebrate the simple joy of playing the viol, to potent moments of substantial emotional depth. ‘My Life hath beene a Souldier,’ Hume declared in 1605, ‘and my idlenes addicted to Musicke.’ Concerto Caledonia have given us the opportunity to indulge in Hume’s addiction. Concerto Caledonia is Scotland’s foremost early music group, bringing to life the classical and traditional music of the nation’s history. This is their fifth recording on Delphian. As well as appearing regularly on BBC Radio 3, the group has also been broadcast on Radios 1, 2, and 4 and appears regularly in live collaborations at the Edinburgh International Festival.

this is a fine reclamation and should be thoroughly appealing to the inquisitive.