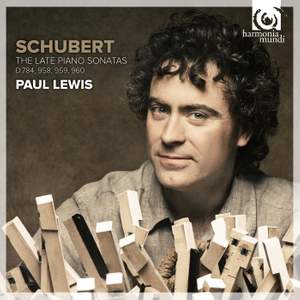 It almost goes without saying that this is piano playing of the highest calibre, to which the recorded sound does full justice. Yet I do have reservations about his choice of repeats...Lewis's... — BBC Music Magazine, July 2014, More…

James enjoys Paul Lewis's latest recording of Schubert - the turbulent piano sonatas written towards the end of his life.

Paul Lewis is today regarded as one of the leading pianists of his generation, having won the most coveted prizes of the great classical institutions, for both his concert career and his recordings on harmonia mundi, topped by three Gramophone Awards including Record of the Year in 2008. He is also the first pianist in the history of the BBC Proms to have played the complete Beethoven concertos in a single season (2010). Early in 2011, Paul Lewis embarked on a two-year concert tour devoted to the works written by Schubert in the last six years of his life. Now completed, he has played in London, New York, Chicago, Tokyo, Melbourne, Rotterdam, Bologna, Florence and at the Schwarzenberg Schubertiade and the Théâtre des Champs-Élysées in Paris.

It almost goes without saying that this is piano playing of the highest calibre, to which the recorded sound does full justice. Yet I do have reservations about his choice of repeats...Lewis's is by far the best realisiations of [the slow movement off D959] that I have ever heard.

Lewis is one of the best pianists I know for delivering both explosiveness of drama and the kind of melting expressiveness which draws you in, but without losing that inner core of strength which raises Schubert from genteel picturesqueness into an artist of granite stature.

While there's no doubt about the virtuosity and authority of Lewis's playing, there's certainly nothing superficially flashy about his performance either...throughout these sonatas I sensed a deeply considered performance where the primary concern was merely letting this extraordinary music speak for itself.