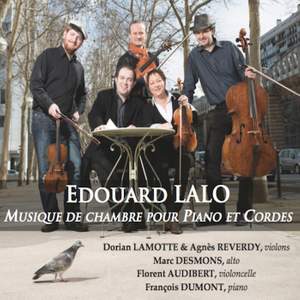 Lalo: Piano Quintet in A Major

This recording presents the world premiere of an inedited copy, bearing autograph corrections, kept at the French National Library, which once attracted the attention of musicologist Joel-Marie Fauquet, a Lalo specialist - the Grand Quintette in B flat for piano, 2 violins, viola and cello, dedicated to Ernest Lubeck.

In a letter to Arthur Pougin, Lalo (10 December 1873) tells us that he had written two quintets that were still unpublished (sadly the first one seems lost forever). Another letter to Ferdinand Hiller (November 5, 1862) further says that "[...] still sick, I’m finishing an Adagio and Allegro for piano and string quartet." Finally, a letter to the same (December 1862) writes: "I'll have a Piano Quintet Fantaisie, performed in a concert on February 13, should it be a success, it will be published this winter, otherwise I’ll keep it in my stash.” Coincidentally, it was in 1862/1863 that Clara Schumann performed in Paris alongside the Armingaud Quartet.