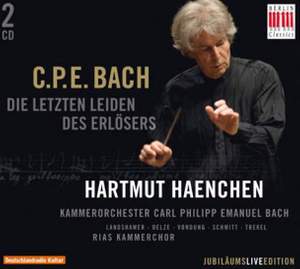 Celebration concert to mark his 300th birthday Saturday March 8, 2014 marks the 300th birthday of Carl Philipp Emanuel Bach. Some people might say that such an anniversary is hardly worth mentioning, given that the composer belonged to what has often been scathingly referred to as the "pre‐Classical" generation, as if that were just a prelude to the "really important" era in classical music. However, the word is now out: Carl Philipp Emanuel Bach's music, with its sensitive aural texture, is a harbinger for the Classical style and even for what came after it, though judging by the content of many concert programmes, word has not yet spread far enough.

So surely that is good grounds for a special concert on the great composer's birthday at which his full‐length Passion Cantata Die letzten Leiden des Erlösers was performed in Berlin's Konzerthaus. Played under the baton of Hartmut Haenchen by the CPE Bach Chamber Orchestra and sung by the RIAS Chamber Choir and famous soloists, it was an impressive occasion featuring poignant music that has no need of the usual branding and is ready for release before Easter as a live recording on two CDs. The concert is also noteworthy for the fact that it was one of the last opportunities to hear the legendary chamber orchestra play the music of their patron live, since on May 1 it will take its leave of the music world with a concert of works by Mozart and then disband. This is a sad loss and means that we will in future have to resort to CDs in order to hear this ensemble and its conductor.