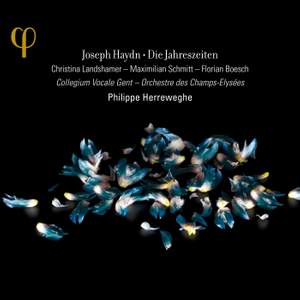 With a first-rate trio of soloists, the accomplished Collegium Vocale Gent and the period sonorities of the Orchestre des Champs-Elysées, the results are thoroughly satisfying. — Choir & Organ, May 2015, More…

Impressed by the Handel works that he heard in London, Haydn felt the need to compose oratorios. First came Die Schopfung (The Creation) Which met with resounding success; then Baron Gottfried van Swieten proposed to Haydn an arrangement of James Thompson’s poem ‘The Seasons’. Initially, Hadyn was little attracted by the text, which deviates from the classic oratorio based on a religious text, but subsequently let himself be convinced. The result, for three soloists, chorus and an orchestra, is a vast pictorial fresco of Nature that describes landscapes and the feelings that they arouse. For the first time, Philippe Herreweghe gives us his own vision of an oratorium by Haydn. This recording is also the first in a Haydn cycle with Philippe Herreweghe for Phi, of which the next project is… Die Schopfung!

With a first-rate trio of soloists, the accomplished Collegium Vocale Gent and the period sonorities of the Orchestre des Champs-Elysées, the results are thoroughly satisfying.

Landshamer, pure and luminous of tone, sings this with an ideal mix of grace and wondering innocence...Boesch makes a genially relaxed Simon, singing the ploughman's song and shooting aria with unforced relish...Herreweghe and his forces do eloquent justice to the poetry, grandeur and, crucially, the sheer joy of this least solemn, most life-affirming of oratorios.