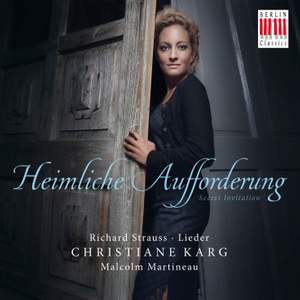 The Bavarian soprano is a delectably light, idiomatic Straussian, and the covered, pearly underside of her voice is the perfect instrument with which to recreate the secret moments and intimacy... — BBC Music Magazine, August 2014, 4 out of 5 stars More…

At Home with Strauss

Christiane Karg feels close to Richard Strauss, and not simply because they both grew up amid Bavarian landscape. Together with Mozart, the great late Romanticist now plays an ever greater part in her repertoire: she was recently acclaimed in both Antwerp and Ghent as Sophie in Der Rosenkavalier. Since Strauss has always figured in her lieder recitals, this CD of Strauss lieder comes as no surprise, especially in view of the forthcoming anniversary year, marking the composer's 150th birthday. Indeed, anyone who has followed Christiane Karg's career will see this new release as a logical consequence. You only have to listen to the timbres in her voice and the skill with which she lends them an artistic and natural touch, and you will hardly be able to avoid comparisons with the great voices of her Fach.

Christiane Karg's personal choice of lieder combines the familiar with the seldomheard, lively songs with more reflective ones, and delivers a convincing range that rightly demotes such details to a secondary role. She succeeds in demonstrating as has seldom been achieved the touching manner in which Strauss's early and mature lyricism is able to transform the great themes of love and transience that were woven into his expression of the Romantic world around him.

One especially charming example is the song "Alphorn" written when the composer was a mere twelve years old, requiring an obbligato horn, played on this recording by Felix Klieser. Her pianist is Malcolm Martineau, an exceptional artist in his own right, who navigates virtuoso hurdles with ease while giving the vocal part a steady foundation. One only needs to hear the opening bars of "Morgen" in order to capture that remarkable musical pulse. – This is a real summit of achievement!

The Bavarian soprano is a delectably light, idiomatic Straussian, and the covered, pearly underside of her voice is the perfect instrument with which to recreate the secret moments and intimacy of the songs she has selected here.

The way she nurtures the text and applies her vibrato sparingly and colourfully and encompasses the emotional and dynamic range of some of the bigger songs…Das Rosenband, Ständchen , Freundliche Vision and Zueignung are wonderful with Martineau’s sensitivity to every phrase the range of tone he deploys to match Karg. I think this is an outstanding Strauss recital.

There is a danger that a solo recital will become tiring when a soprano voice voice is consistently on the bright side but Karg softens the tone where she can - a silvery shimmer of moonlight is cast over 'Die Nacht'...In general, Karg and Martineau are reluctant to linger...so everything stays light and fluent

Her silver-tinged, creamy sound is perfect for Strauss...She captures the rapt sense of resignation and wonderment in Morgen...There’s conspiratorial mischief in her Ständchen...There’s also a fine “guest” appearance from Klieser in the rarely heard Alphorn. In sum, one of the best Strauss Lieder recitals ever.

Throughout the disc, Karg is in marvellous voice, sensitive and clear, always attuned to the text; and here she is matched by Martineau at the top of his game. Recommended.