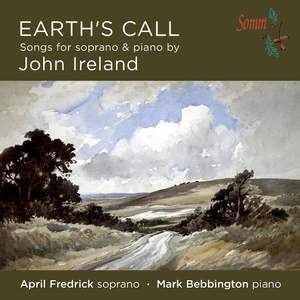 The young American soprano, April Fredrick, is secure enough technically; I just wish, at times, she would have invested more expression in her singing...Mark Bebbington continues to impress... — MusicWeb International, 2nd June 2014 More…

Ireland: When I am Dead, My Dearest

No. 4. Skylark and nightingale

No. 1. Love and friendship

No. 2. Friendship in misfortune

The Three Ravens (arr. for voice and piano)

No. 4. The Salley Gardens

No. 5. The Soldier's Return

Ireland: Love is a sickness full of woes

The Songs of John Ireland form an important part of his output and are highly regarded by professional singers, who appreciate the lyrical contours of his melodies, the sensitivity of his word settings and the wide variety of moods they encompass. As a first-rate pianist himself and the composer of a large body of strikingly individual works for piano solo, including a popular concerto for the instrument (SOMM242), Ireland’s accompaniments to his songs are highly effective counterparts to the vocal lines.

Most previous recordings of Irelands’s songs have featured male voices – tenor and baritone – but this new collection contains several first recordings by a soprano. It also features a world première recording: Variations sur ‘Cadet Rousselle’, (sung in French), which Ireland wrote in 1918 in collaboration with three composer friends – Arnold Bax, Frank Bridge and Eugene Goossens – as a tribute to the music critic Edwin Evans, a staunch champion of both French and British music.

Apart from the beauty of her voice, American Soprano April Fredrick’s most outstanding characteristic is her passion for nuance and text which gets to the heart of both music and character. She was semifinalist in the 2009 Kathleen Ferrier Awards and the Wigmore Hall International Song Competition as well as appearing on BBC Radio 4’s ‘Robert Winston’s Musical Analysis: Ivor Gurney’ and being named Young Outstanding Musician of the Year at the 2010 Brighton Early Music Festival.

Mark Bebbington has been acknowledged in recent years as one of the most distinguished pianists of his generation. His enthusiastic championship of British music is second to none, and his four volumes of John Ireland’s complete piano music on SOMM have received widespread acclaim.

The young American soprano, April Fredrick, is secure enough technically; I just wish, at times, she would have invested more expression in her singing...Mark Bebbington continues to impress with his nicely shaded and nuanced accompaniments...An enjoyable collection that will be welcomed by all admirers of John Ireland.