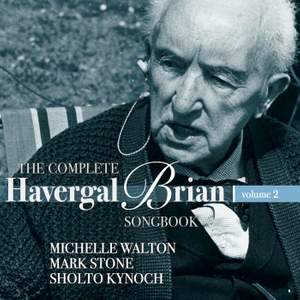 Brian: The Land of Dreams

Brian: Why dost thou wound and break my heart

Brian: Piping down the valleys wild

Brian: When the sun goes down

Brian: Love is a merry game

This is the second and concluding disc of Stone Records’ complete edition of the songs of Havergal Brian. Best known for his many huge symphonies (including The gothic, which was recently performed at the BBC Proms), Brian’s songs reveal the more intimate facets of his character. They are hugely varied in style, ranging from lyrical to angular, and from whimsical to tormented. English song devotees Mark Stone & Sholto Kynoch are joined by soprano Michelle Walton, who beautifully sings the female songs in the Brian canon, and in addition Kynoch plays four short, song-related solo-piano pieces. The booklet, as for all the discs in the Stone Records English Songbook series, contains full texts and notes on the songs, as well as the second half of a short biography of Havergal Brian’s peculiar and fascinating life.

A wonderful insight into the compositions of one of England’s most singular composers of the twentieth century.