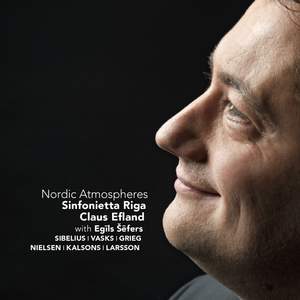 ‘Nordic Atmospheres’ is the second release on Challenge Classics from Sinfonietta Riga and its conductor Claus Efland, and presents a selection of evocative music for strings by composers from the Scandinavian and Baltic regions, among them Sibelius, Grieg, Nielsen and Peteris Vasks.

Claus Efland records exclusively for Challenge Classics. As with his first CD on the label, ‘Concertante’ (CC72621), which was released in January 2014, ‘Nordic Atmospheres’ features him conducting the Latvian orchestra, Sinfonietta Riga. As well as offering the core repertoire of a conductor in the shape of symphonic works and operas, Efland regards himself as an ambassador for music from his native Denmark and the rest of the Scandinavian and Baltic regions.

Sinfonietta Riga is a professional chamber orchestra based in Riga, the capital of Latvia. It was established in 2006 as a state orchestra and is currently based at Spikeri Concert Hall. Although it is a relatively new orchestra, Sinfonietta Riga has already gained a reputation for its professionalism and sophisticated concert programmes, continuously expanding its creative horizons.