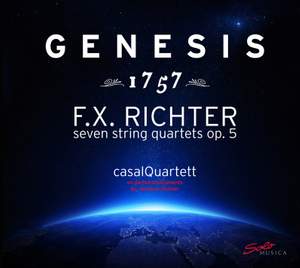 Franz Xaver Richter (1709-1789) - The true inventor of the string quartet? Recent research by musicologists shows it is safe to assume that those works were very likely the seven quartets of opus 5, which are now to be released for the first time in a complete recording on the SOLO MUSICA label. Two exceptional CDs have been compiled, in cooperation with the SWR broadcasting company, featuring the casalQuartett from Zurich, an ensemble that won an ECHO Klassik award in 2010. As was the case on their previous two "BIRTH of the STRING QUARTET" CDs, this release features some almost unknown examples of stunningly beautiful string quartets played on four unique instruments by Jacobus Stainer.