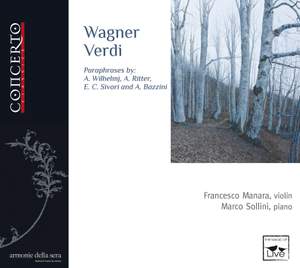 Wagner: Siegfried (arr. A. Wilhelmj for violin and piano)

Siegfried (arr. A. Wilhelmj for violin and piano)

In the 19th century, paraphrasing, improvisation and arranging were widely practiced and played an important role in the diffusion and cohabitation of two different, dominant musical styles typical of that period: on the one hand lyric opera, and on the other concert virtuosity.

In fact, every great virtuoso of the 19th century cultivated the use of improvisation, paraphrasing and so forth, on established themes, which were frequently opera arias or popular motifs and were most frequently written for piano, but occasionally also for other instruments such as violin and piano, as presented here.

This practice allowed a more capillary diffusion of opera music beyond the theatre to more reserved groups, such as the salons of high society or private circles of music enthusiasts.

All of these four 'improvisers' (Ritter, Wilhelmj, Bazzini and Sivori) were outstanding violinists and composers, and renowned international concert musicians of their time (Camillo Sivori was Paganini’s only pupil; Antonio Bazzini who garnered extraordinary praise from Robert Schumann; Ritter, husband of Wagner’s niece Franziska and friend of Richard Strauss, was violinist and director; Wilhelmj, child prodigy, was called by Liszt the German Paganini).