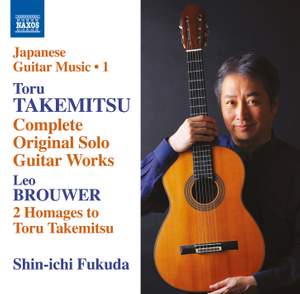 Few composers so skilfully weave silence into the fabric of sound; in this way he could be compared to Mompou or Chopin...Guitarist Shin-ichi Fukuda’s playing is as impeccable and impressive... — MusicWeb International, 27th June 2014 More…

Takemitsu: All in Twilight, four pieces for guitar

Takemitsu: A piece for guitar

Takemitsu: Mori no naka de (In the Woods)

I. Wainscot Pond (after a painting by Cornelia Foss)

No. 5. Lennon / McCartney: Here, There and Everywhere

Toru Takemitsu is widely regarded as the greatest Japanese composer of the 20th century. After the appearance of Folios in 1974 he was acknowledged as a formidable master of writing for the guitar, bringing to the instrument a sensibility and imaginative flair which have seldom been equalled. In the Woods was his final composition. Shin-ichi Fukada and Leo Brouwer were both close friends of Takemitsu, and this programme includes Brouwer’s two heart-felt homages in his memory.

Few composers so skilfully weave silence into the fabric of sound; in this way he could be compared to Mompou or Chopin...Guitarist Shin-ichi Fukuda’s playing is as impeccable and impressive as his credentials are, which is saying something. He was close friends with Takemitsu and similarly with Brouwer.