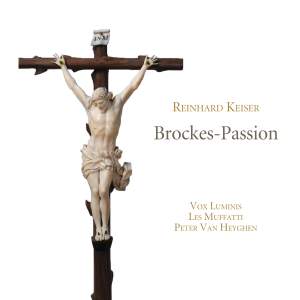 the overall performance is conducted with ideal rhetorical solemnity and dramatic intensity by Peter Van Heyghen. Peter Kooij is surprisingly bold in his delivery of some of Jesus's vivid accompanied... — Gramophone Magazine, August 2014 More…

The Brockes-Passion can be considered the archetype of the German Passion oratorio. As such, it served as a model and source of inspiration for famous later masterpieces, enjoying uninterrupted popularity throughout the 18th century when no less than 11 composers, including Handel and Telemann, set it to music.

The superb version by Reinhard Keiser (1674-1739) is not only the first but also adheres most closely to the great rhetorical power and rich changes of affects of the poet’s text. In German literary history, Barthold Heinrich Brockes (1680-1747) is known above all for his innovative role during the second quarter of the 18th century. In 1712, the year of the Brockes-Passion's first performance, Keiser, fellow citizen of Brockes in Hamburg, was already recognized as the most important opera composer in Germany – and, in some opinions, even in Europe. When the genius of these two great artists combined in a single work, the result could only be spectacular.

The tricentennial of its first performance justified a belated but nonetheless dithyrambic tribute, here presented by the singers of the Vox Luminis ensemble and the instrumentalists of Les Muffatti. Vox Luminis won the Gramophone 2012 Recording of the Year Award for their album of the Schütz Musicalische Exequien (Ricercar RIC311).

the overall performance is conducted with ideal rhetorical solemnity and dramatic intensity by Peter Van Heyghen. Peter Kooij is surprisingly bold in his delivery of some of Jesus's vivid accompanied recitatives but there are plenty of moments that display his customarily compassionate singing.