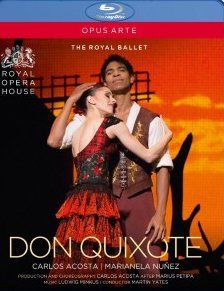 Carlos Acosta’s first venture directing one of ballet’s 19th century classics was eagerly anticipated, as was his own starring role in the production (as Basilio), opposite the Argentinian Royal Ballet principal Marianela Nuñez (Kitri). Packed cinemas for the live relay, as well as sold-out houses for his performances, testified to the draw the great Cuban dancer still exerts – and the audiences were not disappointed. Still built on Petipa’s original choreography, Acosta’s clear dramatic structure and vivid stage action gave the ‘boy gets girl despite her father’ story a more convincing air than usual, with Don Quixote’s parallel obsession with Dulcinea-Kitri coherently woven into the plot. Acosta’s and Nuñez’s performances were peerless, Tim Hatley’s stage designs vivid and apposite, and this production is surely destined to be a perennial Royal Ballet favourite.