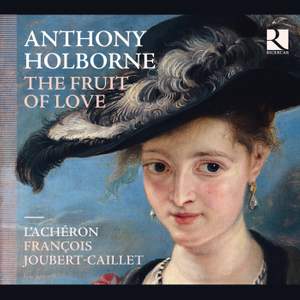 Holborne: The Fruit of Love

The programme is planned imaginatively: groups of five or six contrasting pieces in compatible tonalities. The treatment of the individual dances is imaginative, too...The solemn pavans are especially... — Gramophone Magazine, October 2014 More…

Holborne: The fruit of love

Holborne: Last Will and Testament

Holborne: The teares of the Muses

Holborne: The image of Melancholly

Anthony Holborne published an important collection of works in five parts for viola da gamba and other instruments in 1599; this was the first publication of instrumental dances in England. A skilled lute player himself, he was also known for his mastery of the bandora and the cittern. The dances are mostly pavanes, galliards and allemandes, although they are all linked by titles that either suggest a particular musical character or that are

deliberately more enigmatic… After the recording of Johannes Schenk’s Le Nymphe di Rheno with Wieland Kuijken, we now present the first recording of François Joubert-Caillet with his Achéron ensemble. The ensemble’s viol players have here made a point of using copies of English violas da gamba from the beginning of the 17th century, for the extra length of the strings on these instruments gives them a truly remarkable depth and weight of sound. A few of these viols were made especially for this project.

Accompanied by lutes, cittern, pandora, virginal and ottavino (a small spinet sounding an octave higher than notated), this highly individual consort of viols gives a new and exceptional timbre to the works here recorded.

The programme is planned imaginatively: groups of five or six contrasting pieces in compatible tonalities. The treatment of the individual dances is imaginative, too...The solemn pavans are especially well played...it's a real pleasure to listen to this delightful music, done with such verve and understanding.