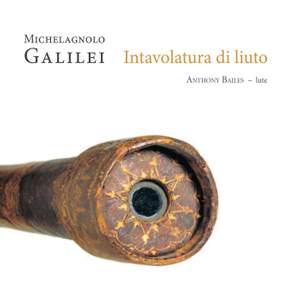 A fascinating mélange...Anthony Bailes has clearly made a study of this music and presents it with character and clarity. In this he is aided by a lovely, rich recording. — MusicWeb International, 26th June 2014

Galilei, M: Sonate in Do Minore

Galilei, M: Sonate in Do Maggiore

Galilei, M: Toccata in Re Minore

Michelagnolo Galilei, the younger brother of the famous Galileo, was a professional lutenist at the court of Maximillian of Bavaria. In this, he followed in the footsteps of his father, Vincenzo, also a lutenist but equally renowed as a theorist and one of the initiators of Count Bardi’s influential Florentine “Camerata”. Both Michelagnolo and Galileo were taught to play the lute by their father and the music included in this programme would have been known to and played by both brothers. In 1620 Galileo helped finance Michelagnolo’s Il primo libro d’intavolatura di liuto. For this reason, most of the pieces for this project have been chosen from this publication. Despite being relatively unknown, it contains repertoire of high musical quality, reflecting the new thinking of the day and displaying both Italian influence: as in the poetic toccatas, stylistically close to the toccata de durezzo e ligature; and the new seventeenth-century French style as evinced by the correntes and voltes. As such the collection is a unique amalgam of forms encountered in no other publication of lute music. The book also contains passamezzi with their salterelli, a genre found in countless sixteenth-century collections and fulfilling the same function as the “twelve bar blues” in our own time.

A fascinating mélange...Anthony Bailes has clearly made a study of this music and presents it with character and clarity. In this he is aided by a lovely, rich recording.