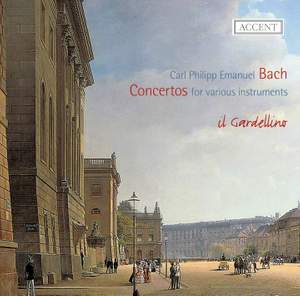 Another very welcome addition to the CPE Bach discography … None of the soloists needs any recommendation from me … [they are] all renowned practicioners of musical arts and CPE Bach provides... — Early Music Review, April 2014 More…

Numerous interesting publications were issued on the occasion of the 200th anniversary of the death of Carl Philipp Emanuel Bach. The biggest surprise, however, came 13 years later in 2001, when the archive of the Berlin Sing-Akademie was rediscovered in Kiev and sent back to the Berlin State Library. A large number of works of CPE Bach were found there; it was finally possible to make an inventory list of all the musical treasures contained in this collection. The Concerto in D minor for transverse flute and orchestra, the existence of which was known but of which no manuscript was available, is one of the many works that enriched the concert repertoire from that time onwards. And now, over a decade later, Bach’s 300th birthday offers one more occasion to highlight his genius with new insights.

Another very welcome addition to the CPE Bach discography … None of the soloists needs any recommendation from me … [they are] all renowned practicioners of musical arts and CPE Bach provides them plenty of scope for virtuosic display.

[De Winne] does a wonderful job being easy-going and charming and injecting some real shape and purpose...What I like about Il Gardellino’s choice of works is that we get a good sense of Emanuel’s restless musical personality...In all three concertos there’s an ideal balance between the soloists and small orchestra; the performances have the suppleness of chamber music...This is my favourite disc of the tercentenary releases.