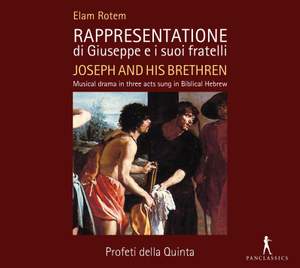 Using the musical language and context of the revolutionary musical dramas by Cavalieri, Caccini and Monteverdi, Elam Rotem's piece tells the story of Joseph and his brethren: one of the most touching stories of the Old Testament. The drama was composed by Rotem especially for his ensemble Profeti della Quinta, and is set for five voices, instruments and basso-continuo. The text is taken directly from the book of Genesis, sung in its original Hebrew (the booklet contains translations in English, French and German).

As written in the preface to Emilio de Cavalieri's 'Rappresentatione di Anima e di Corpo' (1600, Rome), the aim of music is to move the feelings of the listeners: "mercy and happiness, crying and laughter". The 'Rappresentatione di Giuseppe e i suoi Fratelli' follows this ideal, aiming to stir the emotions of the listeners, even the doubtful ones.