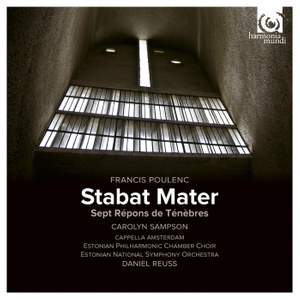 The word 'powerful' is not one we naturally associate with Poulenc...Still, these are vivid and, yes, powerful performances. — BBC Music Magazine, May 2014, 4 out of 5 stars More…

Poulenc’s 'Stabat Mater', which he described as a ‘requiem without despair’, was written in 1950 following the death of Christian Bérard who designed the sets for Cocteau’s films and plays and was a leading figure of 1940s Paris. This masterly work, dedicated to the Virgin of Rocamadour, gives pride of place to the chorus and clearly shows its line of descent from the French grands motets. On completing it, Poulenc wrote to Pierre Bernac: "It’s good, because it’s completely authentic".

From the time of his pilgrimage to Rocamadour in 1936, Poulenc's religious output was filtered through his Catholic interpretation of the world and his personal trajectory. The 'Stabat Mater' is no exception to this rule, in that it associates the events and circumstances of his own life with the drama of the Gospels. It identifies the three figures of Christ, the Virgin and the Faithful Disciple with biographical figures: Bérard, Poulenc, and the latter’s lover Lucien Roubert, whom he was to refer to as ‘the secret’ of the 'Stabat Mater' and 'Dialogues des Carmélites'.

In December 1959 Leonard Bernstein commissioned a new work from Poulenc for the New York Philharmonic Orchestra. He chose to write the 'Sept Répons des Ténèbres' (Seven Tenebrae Responses) for treble soloist, a chorus of boys’ and men’s voices and symphony orchestra. The posthumous first performance took place on 11 April 1963 at Philharmonic Hall (now Avery Fisher Hall) under the direction of Thomas Schippers. Poulenc had insisted on these all-male vocal forces, but, 50 years after his death, it is important to allow for more widespread performance of this fascinating score which has too long languished in the shadows.

The word 'powerful' is not one we naturally associate with Poulenc...Still, these are vivid and, yes, powerful performances.

Sampson eloquently expresses the isolation and apprehension of the solo line [in the Sept Répons], and the mixed voices...sensitively and dramatically project the sombre, fearful, abject world in which Poulenc finds himself. Theirs is also a fine performance of the Stabat Mater...The choir and orchestra rise fully to the eruptions of emotion.

This is a beautiful recording, and a valuable coupling of Poulenc’s two most serious works for chorus and orchestra … Very warmly recommended.