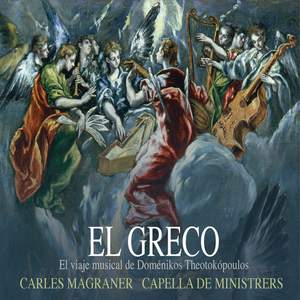 Doménikos Theotokópoulos’s musical journey includes the most iconic pieces of music from Crete, in Venice and Rome, to finish his days in the Spanish city of Toledo. In Crete: El Greco was formed as a painter in the tradition of Byzantine art, where the icon painting would condition the most of his later works, and there he learned to paint with tempera technique.

After, he travelled to Italy: he was interested from the beginning to paint ‘’alla maniera italiana’’, in Venice, Crete political capital, in 1567. Since his arrival to Venice he contacted to Titian’s workshop, where he find the necessary tools for the reinterpretation of Western models, acquiring new technical expertise. His life journey ends in Toledo: was a fortune for the time of Philip II that El Greco was found in Spain, particularly in Toledo, the right environment for creative restlessness. As quoted the painter Jusepe Martinez in his Discursos practicables del Noblísimo Arte de la Pintura, around 60 years after El Greco’s death: “He won many ducats, spent on unnecessary extravagance of his house, having salaried musicians to enjoy all the delight when eating’’. So, let’s serve him as the music.