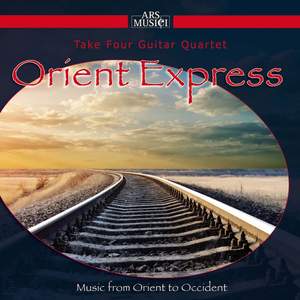 Orient Express is the second CD from Ars Musici to feature the highly-regarded Take Four Guitar Quartet. As its title suggests, the pieces represent music from countries along the route of the legendary train of that name. The selection includes arrangements of compositions by Khachaturian, Dvorak, Shostakovich, Liszt, Joseph Achron, Komitas, and a divertimento by Atanas Ourkouzounov.

The guitarists who make up the Take Four Guitar Quartet - Pia Grees, Johan Fostier, Matthias Kläger and Luc Vander Borght - come from Germany and Belgium and all four studied under Alberto Ponce in Paris. The Quartet was formed in 1999 and has achieved great success at regular concerts around the world ever since. The group’s previous recording for Ars Musici, Tango Perpetuel (233055), was released early in 2013.

The Orient Express programme opens with arrangements of music from Khachaturian’s exotic ballet Gayaneh and Dvorak’s wonderfully lyrical Serenade for strings. The Hebrew Melody by Joseph Achron provides evidence of the Russian composer’s need in exile to develop a truly Jewish music. Other works featured on the disc are Komitas’ Armenian Folk Dances, Liszt’s ever-popular Hungarian Rhapsody No. 2, Shostakovich’s Jazz Suite No. 1, the popular song Schöner Gigolo by Leonello Casucci, and Divertimento by the contemporary Bulgarian guitarist/composer Atanas Ourkouzounov.