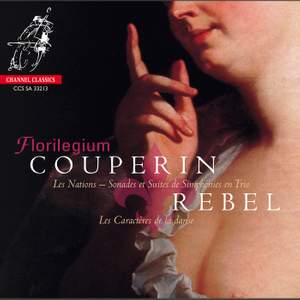 Florilegium's stylish performances are accented with English reserve...but once past introductions, the performances are cordial and occasionally even jocular, thanks in part to David Miller's... — Gramophone Magazine, April 2014 More…

The two composers presented on this recording both came from families of musicians active at the Court of Versailles. François Couperin entered the service of the King as organist of the Chapelle du Roi in 1693 and Jean Jean-Féry worked as a violinist and harpsichordist at the Académie Royale de Musique and gradually rose through the musical hierarchy securing a post as violinist in the Chapelle du Roi and chamber composer for the King.

Couperin left no precise instructions as to instrumentation. Like many chamber works of the period, they are therefore also suitable for flutes or oboes or combinations featuring the violin and flute as we have done here. The pitch of the instruments on this recording is A392, a full tone below modern concert pitch (A440), and often considered to be the performing pitch at the Court of Louis XIV in the early part of the 18th century.

Regular performances in some of the world’s most prestigious venues have confirmed Florilegium’s status as one of Britain’s most outstanding period instrument ensembles. Since their formation in 1991 they have established a reputation for stylish and exciting interpretations, from intimate chamber works to large-scale orchestral and choral repertoire. Florilegium regularly collaborate with some of the world's finest musicians including Dame Emma Kirkby, Robin Blaze and Elin Manahan Thomas.

Florilegium's stylish performances are accented with English reserve...but once past introductions, the performances are cordial and occasionally even jocular, thanks in part to David Miller's gently swaggering lute accompaniments. In each work, the chaconne or passacaille enchants.