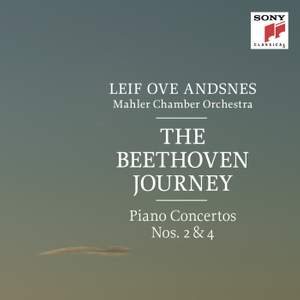 an effortlessly musical performance, helped by the immaculate playing of the Mahler Chamber Orchestra. And, as in the first disc of the series, Andsnes's attention to orchestral detail while... — BBC Music Magazine, May 2014, 5 out of 5 stars More…

“The Beethoven Journey” is a composite work of Leif Ove Andsnes with the Mahler Chamber Orchestra. The Berlin based orchestra is one of the world´s most acclaimed touring orchestras, on the move approximately 200 days each year. The 45 core members of the MCO come from 20 different countries and live all over Europe.

The New York Times has called Leif Ove Andsnes “a pianist of magisterial elegance, power, and insight.” With his commanding technique and searching interpretations, the celebrated Norwegian pianist has won acclaim worldwide; the Wall Street Journal named him “one of the most gifted musicians of his generation.” Andsnes gives recitals and plays concertos in the world’s leading concert halls and with its foremost orchestras, besides being an active recording artist. An avid chamber musician, he served as co-artistic director of the Risor Festival of Chamber Music for nearly two decades, and was music director of California’s 2012 Ojai Music Festival. He was inducted into the Gramophone Hall of Fame in July 2013.

The pianist has received Norway’s most distinguished honour, Commander of the Royal Norwegian Order of St. Olav. In 2007, he received the prestigious Peer Gynt Prize, awarded by members of parliament to honour prominent Norwegians for their achievements in politics, sports, and culture. Andsnes has also received the Royal Philharmonic Society’s Instrumentalist Award and the Gilmore Artist Award. Saluting his many achievements, Vanity Fair named Andsnes one of the “Best of the Best” in 2005. Andsnes is a Professor at the Norwegian Academy of Music in Oslo and a member of the Royal Swedish Academy of Music.

The 2013-14 season sees Andsnes embark on a new leg of “The Beethoven Journey,” his epic long-term focus on the master composer’s five piano concertos. Orchestral highlights include performances of the Second and Fourth concertos with Gustavo Dudamel leading the Los Angeles Philharmonic and the “Emperor” with the London Philharmonic and Vladimir Jurowski, besides collaborations with the Deutsches Symphonie-Orchester Berlin; the orchestras of Munich, Stockholm, and Helsinki; and the Swedish and Norwegian Chamber Orchestras. It is with an all-Beethoven program that the pianist launches a 19-city solo recital tour of the U.S., Europe, and Japan, making stops at New York’s Carnegie Hall and Chicago’s Symphony Center, as well as in Princeton, Atlanta, London, Vienna, Berlin, Rome, Tokyo, and more. He rounds out the season in company with baritone Matthias Goerne, with whom he appears in four European capitals. Andsnes will be reunited with the Mahler Chamber Orchestra (MCO) for two European tours, showcasing Beethoven’s Second and Fourth concertos in November and coupling the Fifth with his Choral Fantasy in May.

an effortlessly musical performance, helped by the immaculate playing of the Mahler Chamber Orchestra. And, as in the first disc of the series, Andsnes's attention to orchestral detail while conducting from the keyboard is praiseworthy.

Andsnes has two great assets: a highly reactive chamber orchestra of the first rank and a acumen as a Mozartian that stands him in good stead...such is the clarity of detail that I find myself noticing details I've never heard before...Another extraordinary achievement from all concerned, sound engineers included.

[Andsnes] has perfect rapport with the Mahler CO, and both performances are very fine. In their hands, the early, “lightweight” No 2 becomes truly Beethovenian.

Andsnes responds to an almost childlike wonder and innocence in these concertos with a performance full of optimism and light...It’s a serene performance that grips, but lightly.

The style is an intriguing amalgam of certain nods towards “historically aware” playing...with the sonority of a modern grand piano. But it works well, with Andsnes’s characteristic blend of physicality, limpid clarity and poetic subtlety in the Second Concerto finding a match in the Mahler Chamber Orchestra’s refined technique and animated colouring.