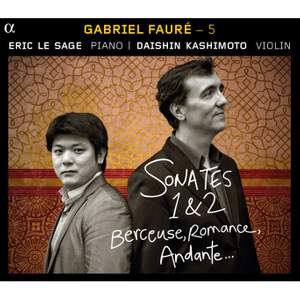 This final instalment in this complete recording of Gabriel Fauré's chamber music features his compositions for violin and piano. Eric Le Sage and Daishin Kashimoto, concertmaster of the Berlin Philharmonic Orchestra, give us a particularly convincing and moving interpretation of these intimist works, thanks to a complicity polished in the course of numerous collaborations in concert.

Gabriel Fauré was 30 when he began his first violin sonata in the summer of 1875.

Not until four decades later, when he was director of the Paris Conservatoire, would he get round to a second sonata. More than an anthological disc, the present volume paints the portrait of a life, bearing witness to the change in civilization between the waning 19th century and the coming upheavals of the 20th.

This last volume brings to a close a complete recording of reference, based on Eric Le Sage's capacity for federating first-rank artists around him. This original approach was hailed by the international critics for his first complete recording, devoted to Schumann.