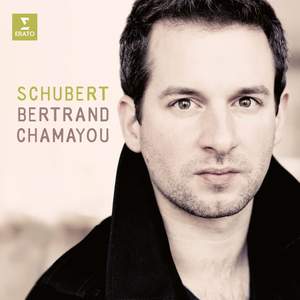 Chamayou's impressive reserves of articulation and firepower seem a touch stretched by the finale of the Wanderer Fantasy (compared, say, with Murray Perahia's recording), but elsewhere his tight-reined,... — BBC Music Magazine, June 2014, 4 out of 5 stars More…

Bertrand Chamayou, described by Gramophone as a “young French pianist of an impeccable pedigree”, is already firmly established as one of the most thoughtful and fascinating pianists of his generation. He has chosen Schubert – with the Wanderer-Fantaisie as the centrepiece – for his first release as an ERATO artist, and, in the course of 2014, the composer’s works will also feature in Chamayou’s recitals in Germany, Belgium, the US (New York), France and Austria.

Born in Toulouse, and a graduate of the Paris Conservatoire, Chamayou had ambitions to be a composer before the piano became his musical priority, and his questing and creative spirit is reflected in a diverse and eclectic repertoire that defies simple categorisation: he has built his reputation with the music of, among others, Liszt, Franck, Messiaen and contemporary composers. It is perhaps not surprising that he drew the attention of Pierre Boulez, a similarly unclassifiable musician, who has conducted Chamayou in concerto performances on a number of occasions.

Gramophone, putting Chamayou’s playing in a class with Alfred Cortot, has praised the way he … “harnesses power and depth alongside his sparkling virtuosity” and noted his “textual clarity, warm and affectionate expression and luminous piano tone”, while International Record Review singled him out for special praise among the younger pianists of today:

“These days, when unprecedented virtuosity is the common coin of an entire of young pianists, it is not easy to describe what precisely puts Chamayou head and shoulders above his peers. His mastery of the piano is flawless; is oneness with the instrument complete. As one listens to his performances, perfection of execution so quickly becomes part of the landscape that you almost forget it. Unblemished by obtrusions of ego or exhibitionism, what we hear seems some pure distillation of musical thought, some unadorned essence of poetic utterance, as though a fleeting ideal were captured and held aloft in all its radiance. When Chamayou plays, you believe every note.”

France’s leading music awards, Les Victoires de la Musique, have traced the trajectory of Chamayou’s career: in 2006 he was named as the year’s ‘Révélation’ (outstanding young talent), while 2011 brought him the prize for Solo Instrumentalist and 2012 for Best Recording.

In the concert hall, conductors with whom he has collaborated include Semyon Bychkov, Andris Nelsons, Leonard Slatkin, Neville Marriner, Michel Plasson, Stéphane Denève and Jérémie Rhorer, while among his chamber music partners are fellow ERATO artists Renaud Capuçon, Gautier Capuçon and Quatuor Ebène.

Chamayou's impressive reserves of articulation and firepower seem a touch stretched by the finale of the Wanderer Fantasy (compared, say, with Murray Perahia's recording), but elsewhere his tight-reined, skilfully paced virtuosity and musicianship excel, while his expressive touch in Liszt's Schubert song-transcriptions is state-of-the-art.

[he] treats everything with equal respect and palpable affection. The Wanderer is a real test of any musician but Chamayou surmounts the work's sometimes unpianistic demands without ever leaving you, as some do, feeling as if you've been punched in the face. Instead he revels in its virtuosity and in the sheer variety of texture.

his musically insightful, technically flawless playing can be confused with no-one else's. He exudes confidence without the slightest hint of egotism or ostentation...Ultimately the key characteristic of this recording is that indispensable element of great Schubert playing: a singing line capable of piercing the very depths of the heart.

Conceived by the pianist as a kind of “Schubertiade”, this affecting, beautifully performed disc conjures up those great occasions of convivial music-making, but on the assumption they could embrace the serious statement, too

Chamayou's playing is consistently persuasive. The Wanderer-Fantasie is a bit heavyweight for my taste, although the Klavierstücke are superbly done, and there's also a wonderfully graceful performance of the D790 Deutsche Tänze.