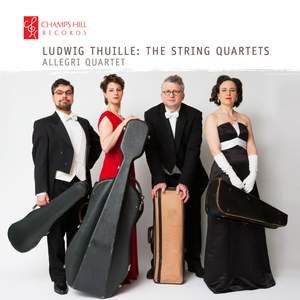 Thuille: Quartet No. 1 in A Major

Thuille: Quartet No. 2 in G Major

Champs Hill Records continues its survey of the neglected music of Ludwig Thuille with a new recording of his String Quartets Nos 1 & 2, performed by the Allegri Quartet.

Leader Ofer Falk describes in the booklet how he came to know Thuille’s music through a chance encounter with a score for one of the Quintets (which the Allegri Quartet have recorded for Champs Hill Records, available on CHRCD002) - music left behind in a piano stool given to a friend.

Ofer says: “Here was a true masterpiece. A creation by a previously unknown (at least to us) yet masterful composer at the height of his prowess. The style was late romantic. The structure was of the grandest of scales, yet traditional and flawlessly constructed. The harmonic language had elements of Brahms, Bruckner and Wagner, but to our ears it most resembled the music (early to mid period) of Richard Strauss.”

The Allegri Quartet are Britain’s oldest chamber group, as they celebrate their 60th anniversary. “The current line-up plays with elegance and cleanness of detail. Avoiding heavy gesture in favour of nimble energy” - Fiona Maddocks, Independent on Sunday - June 2013

Born in Bolzano (Bozen), capital of Southern Tirol, Ludwig Thuille lived and created in fin de siècle Munich and was one of the leading forces in pre World-War I Germany. His operas were successfully performed in central opera houses from Moscow to New York. His vocal and instrumental pieces were often performed in Europe's main concert venues. His treatise on harmony (Harmonielehre) became a standard textbook throughout Europe and many of the continent's musicians were brought up on Thuille's harmonic thoughts and conceptions.

Mendelssohn for the late-Romantic generation, Ludwig Thuille's post-Classical tunefulness is memorably captured by the Allegri's gleaming precision and affectionate poise.

The Allegri play with beguiling sweetness.

Brahms's influence is apparent in the Second Quartet in G major, a work of quite astonishing beauty. Ending with its slow movement and seemingly lacking an upbeat finale, it is often described as unfinished. But the Allegris' perfectly proportioned performance suggests a cogent artistic statement, complete in itself, to which nothing need be added.