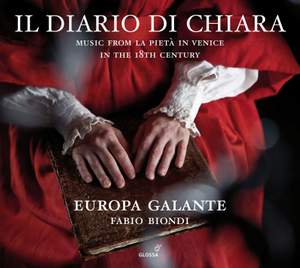 Music from La Pietà in Venice in the 18th century

Abandoned at the age of two months and taken in by the Ospedale della Pietà, Chiara (or Chiaretta) rose – within that enclosed charitable institution in Venice – to become one of the leading European violinists of the middle of the 18th century. No stranger to such acclaim, himself, two and a half centuries later, Fabio Biondi, on his first release for Glossa, has devised a CD drawing on the personal diary of this remarkable musician who was taught by Antonio Vivaldi, and later became a virtuoso soloist on the violin, as well as the viola d’amore. The programme consists of concertos and sinfonias by composers who, like the prete rosso, taught at the Pietà: Porta, Porpora, Martinelli, Latilla, Perotti and Bernasconi are all musicians whose compositions charm and delight as much today as they did in the time of Chiara.

Along with this inspired vision-in-sound of the 18th century musical world of the Ospedale comes a half-hour long DVD dramatisation; CD and DVD admirably reflect both the virtuosic skills demanded of the instrumental soloists of the day and the revolution in musical tastes (inside the Pietà as well as outside it), as the Baroque passed to Classicism via the galant style.

The solo performances are incandescent, veering between searing lyricism and precocious virtuosity. Extemporisations show why Chiara enthralled her audiences...In a short bonus DVD, Chiara's diary is dramatised as a monologue set against musical excerpts. it's Chiara's music, and the players' performances, that capture the heart.

impeccably played … one which all lovers of the Italian Baroque should not miss.

Not that Fabio Biondi and Europa Galante treat any of this music as if it were anything less than burstingly vital. Vigorous bowing, an aggressive, sometimes almost pesante sound, seething vibrato in the solo lines and boldly gestural rubato mean that things are never allowed to flag.

Biondi himself plays the solo parts, in his usual robustly stylish way. It's all a bit hard-driven at times, but with the accompanying documentary on DVD it makes a useful package