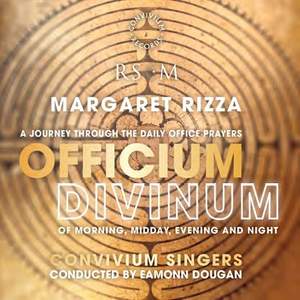 A Journey through the daily office prayers

Rizza, M: The Night Has Passed

Rizza, M: Open Thou Mine Eyes

Rizza, M: Let My Prayer Rise Before You

Rizza, M: Kindle in Our Hearts

Rizza, M: Before the Ending of the Day

Rizza, M: Keep Me as the Apple of Your Eye

"'Officium Divinum' as an idea was conceived by Tim Ruffer, Head of Publishing at the RSCM. While exploring projects, he came up with the inspiring idea of composing music for the four periods of daily prayer: Morning, Midday, Evening and Night Prayer from the ‘Common Worship, Daily Prayer’. I have always been attracted to and influenced by the Gregorian and Taizé chants, both of which have echoes in my music.

The four days recording this album in the beautiful Portsmouth Cathedral were memorable and I want to convey huge thanks to Convivium Singers and the instrumentalists for their strong performances under the inspirational direction of Eamonn Dougan [assistant conductor with The Sixteen].

I have been blessed since 2009 to have had the opportunity to write for the RSCM, an institution which I admire so much." Margaret Rizza

Margaret Rizza (b.1929) studied at the Royal College of Music, London and at the National School of Opera, London, and continued her training in Siena and Rome. She sang professionally for 25 years, under the name of Margaret Lensky, under such conductors as Benjamin Britten, Igor Stravinsky and Leonard Bernstein.

She then taught singing at the Guildhall from 1977 to 1994. In 1986 she dedicated herself to the work of spirituality and to the wider aspect of music in the community, taking groups of students to share their music with people in prisons, hospitals, hospices, inner city schools, MS centres, blind schools and working with people with physical and learning difficulties. She was closely involved with Dartington International Summer School giving masterclasses and vocal workshops over many years up until 2008.

Margaret Rizza began composing in 1997, her contemplative choral music being widely acclaimed not only in the UK but also abroad.