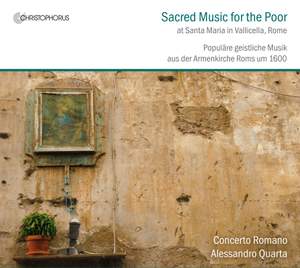 Offer, Sacred Music for the Poor

at Santa Maria in Vallicella, Rome

After the downfall of the Roman Empire, the 17th century was in many respects the only epoch in which Rome was a modern city. Unlike today, however, one encountered the most abject poverty in the city centre near the river, namely where the danger of high water and flooding was greatest. La Vallicella is a neighbourhood in Rome that still exists today, centrally located at the bend of the Tiber between the Via Giulia and the shore road Lungotevere Tor di Nona, within sight of the Castle of the Holy Angel and St. Peter’s Cathedral. In the Rome of the Counter Reformation, this area was overpopulated with people of mostly modest origins; it was noted for its high level of crime and a complete lack of facilities for the assembly and edification of its inhabitants. It was precisely these conditions that caused the priest Filippo Neri (1515-1595), canonised shortly after his death and against his avowed will, to relocate his missionary activities to Vallicella during the second half of the 16th century. In the heart of this district, the beautiful church of Santa Maria in Vallicella (generally known simply as Chiesa Nuova, or new church) is still very impressive today, as is the prayer hall of the Philippian brothers affiliated with it, known as the Oratorium – a centre of liturgy and catechesis, initiated by Neri himself, in which music played a fundamental role.

Rome in those days was not only synonymous with colossal polyphony, multi-choral opulence and concertante virtuosity. In this urban environment with its variety of everyday realities, the Oratorium movement of the Philippian brothers was one of the most active musical centres. They regarded music as probably the most important medium for the dissemination of their message. Already from the second half of the 16th century onwards, they encouraged and stimulated multifarious and quite specific musical production. In addition, they drew from the ancient, uninterrupted medieval tradition of lauds and from the early Florentine Renaissance, creating a modernised version of sacred music in general, and ecclesiastical lauds in particular, in the oratoria, churches and streets of the Vallicella district. This repertoire, a link between sophisticated and popular music, represents an important part of Roman cultural history, forming one of the most beautiful points of contact between folk and art music.