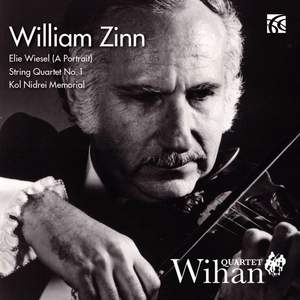 There is not a scintilla of dissonance here. This is a contemporary composer who writes for the string quartet... in a refined idiom redolent of late Beethoven or Schubert. — MusicWeb International, 13th February 2014

Composer-violinist William Zinn was a member of many major orchestras. He performed under the world’s greatest conductors and his compositions have been played worldwide. He has composed over 500 chamber ensembles, symphony, vocal and solo instrumental works. His compositions cover the entire spectrum of musical instruments including all the woodwinds, brass, strings, harp, guitar, harmonica and piano. He composed the ‘7 Seasons’ (seven multiple movement tone poems for orchestra) based on the seven most important Jewish holidays.

"After reading the book Memoirs, which outlines the life story of Elie Wiesel, I became intrigued to learn more about the man and his talents as an author. With the inhuman trials and tribulations of a holocausts survivor, he became an important worldwide figure. As a composer, I decided to pay tribute to this man, and to honour him by expressing musically my impressions of his character and accomplishments. I have chosen the medium of the string quartet for its inherent seriousness, its sensitivity and its depth. The music does not represent a depiction or a description of events, but rather, my emotional responses to the overcoming of his hardships and internal struggles.

My first string quartet was composed in 1966 upon the death of the cellist of my quartet, at the age of 60. Benjamin De Miranda was a fine musician, oil painter and intellectual. In a moving poem to his wife, he requested that Beethoven’s Cavatina Op.130 be played at his funeral. Since he was fond of Beethoven, I composed the music in the style of Beethoven. Dedicated to those individuals who have sacrificed themselves, and continue to do so, for the cause of freedom.

The Kol Nidrei Memorial was composed in remembrance of the six million innocent Jews that were slaughtered during the holocaust. I took the most sacred, mournful theme in all Hebraic music, and built a composition upon it. The theme for the deceased is repeated five times, in different ranges, on different instruments and with different variations each time. The rest of the piece is serious but uplifting, bringing hope and optimism for the future."

There is not a scintilla of dissonance here. This is a contemporary composer who writes for the string quartet... in a refined idiom redolent of late Beethoven or Schubert.