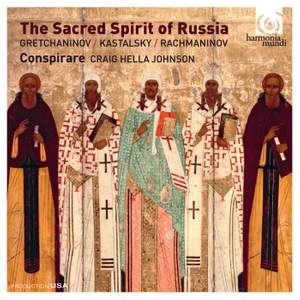 The Sacred Spirit of Russia

Conspirare’s reading of these pieces is passionate without being perfumed. A lovely recording, in immaculate sound. — Choir & Organ, March/April 2014 More…

Kastalsky: As Many Have Been Baptized (Znamenny Chant), Op. 18c

anon.: Hymn to the Mother of God for the Nativity (Znamenny Chant)

Chesnokov: Praise the Lord from the Heavens, Op. 42 No. 9

Andrei Ilyashenko: We Should Choose to Love Silence (Concerto for the Nativity of Christ)

To understand and partake of the 'Sacred Spirit of Russia' requires one, first and foremost, to experience the beauty and splendour of the Russian Orthodox liturgy, which has been an integral part of the Eastern Slav identity for over 1000 years.

The sacred music of the New Russian Choral School features sublime settings of the liturgy that draw on a rich history of Orthodox chants and native traditions, creating music of unprecedented colour and textural richness. Following the lead of Tchaikovsky, composers such as Kastalsky, Gretchaninov, Chesnokov, Rachmaninov and a host of others have left us a treasure-trove of musical delights.

Craig Hella Johnson and the 35-strong Conspirare (featuring the astounding basso profundo Glenn Miller) present a glorious sampling of some of the finest works in this genre including Martynov's mesmerising 'Beatitudes' for three sopranos and choir and Kedrov's setting of the Lord's Prayer. Conspirare's esteemed language coach is the editor of Musica Russica, Vladimir Morosan who has also written the booklet notes. The only 'inauthentic' part of this SACD recording for hm USA is the spot-on intonation.

Conspirare’s reading of these pieces is passionate without being perfumed. A lovely recording, in immaculate sound.

Everything is rooted in the bass, as it should be, and the forward brightness of the upper voices creates thrilling friction against their darker tones. This music has waited a long time for a champion, and Conspirare do it proud.

All of the music performed here is heart-stoppingly, soul-transfixingly and spirit-piercingly beautiful...Glen Miller's ability to reach the lowest notes is almost freakishly delightful, if one can use such frivolous words in connection with such serious music...The ethereally beautiful sound on this SACD preserves a happy nimbus of reverberant space around the singers.

From the outset Conspirare sing with thrilling weight and accuracy; also, the acoustic of this Texas church provides a near-ideal performing space for the feast of antiphons, hymns and prayers that follows...Conspirare breathe new life into this repertoire; a joy from start to finish.

Russian Orthodox church music seems to sit as unmovable as the architecture in which it was first sung. But that is not to say that every piece sounds the same, as the American choral group Conspirare’s fine recital shows.