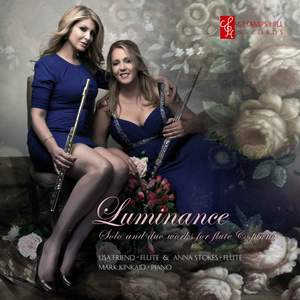 Luminance (solo and duo works for flute and piano)

The total effect can be a tad floaty and saccharine, but there is beautiful playing. — BBC Music Magazine, May 2014, 3 out of 5 stars

Hüe: Fantasie for Flute and Piano

French composers predominate on this recital of music for solo and flute duet from terrific flautists Anna Stokes and Lisa Friend.

A substantial number of virtuoso flute works exist as a result of the ‘Concours Pieces’ from the Paris Conservatoire. Begun in 1860 under the professor of flute (and founder of the modern French school of flute playing) Paul Taffanel, one of these test pieces for solo flute is included: a Fantasie by Georges Hue.

In amongst all things French is Piazzolla’s Oblivion, in a charming personal arrangement by Lisa and Anna.

Other European schools of playing are also represented: Carl Joachim Andersen was a 19th century Danish flute virtuoso who suffered paralysis of the tongue, so gave up playing and concentrated on conducting. His Three Pieces (Trois Morceaux) remain popular with flautists and audiences.

British flautist Lisa Friend commenced her studies in New York with Renee Siebert of the New York Philharmonic. At seventeen, Lisa won a Scholarship to the Royal College of Music where she studied with Susan Milan. Twice winner of the Martin Music Scholarship, this enabled her to study at the Paris Conservatoire with Alain Marion and Ida Ribera.

Award-­winning flautist Anna Stokes studied at the Royal College of Music and is an established orchestral and chamber musician. Founder of the Emmanuel Ensemble, she has given recitals in the Purcell Room, Wigmore Hall and across the UK.

The total effect can be a tad floaty and saccharine, but there is beautiful playing.