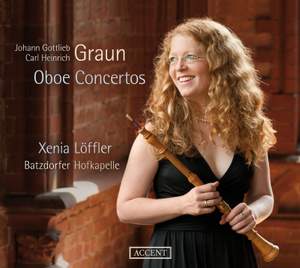 One can no longer determine with any certainty which of the brothers wrote the oboe concertos recorded here – the existing sources are too unclear and the differences in their personal styles are too slight. What is certain, however, is that the name "Graun" was a kind of seal of approval in those days for zestful music rich in ideas – an estimation still valid today, as is readily apparent when listening to these concertos.

The oboist Xenia Löffler has distinguished herself as a specialist for the North German repertoire of this period, as in her recordings with oboe concertos from the Dresden Court and with works from the Dresden Pisendel Collection (ACC24202 and 24222). Alongside her teaching activities at the Academy of the Arts in Bremen, she is a member of the Akademie für Alte Musik Berlin and in great international demand as a soloist.