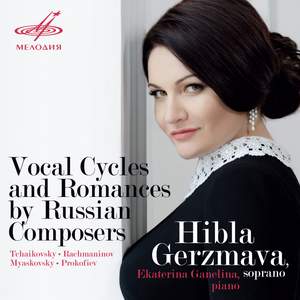 Tchaikovsky: To bilo ranneyu vesnoy (It happened in the early spring), Op. 38 No. 2

Tchaikovsky: Skazhi, o chom v teni vetvey (Tell me, what in the shade of the branches), Op. 57 No. 1

Tchaikovsky: Softly the Spirit Flew Up to Heaven, Op.47, No.2

Rachmaninov: My child, your beauty is that of a flower, Op. 8 No. 2

There is no doubt that the singer is one of today’s most brilliant vocalists of Russia and the world. A People’s Artist of Russia and the Republic of Abkhazia, a winner of the Golden Mask, Casta Diva, Triumph and Golden Orpheus awards, a welcome and longed-for guest of the greatest operatic and concert stages worldwide, she has performed at the Mariinsky Theatre in Saint Petersburg, the Wiener Staatsoper, the Bayerische Staatsoper in Munich, Covent Garden and Metropolitan Opera, the Théâtre du Châtelet and Théâtre des Champs Elysées in Paris, the Teatro dell’Opera di Roma in Rome and Teatro Comunale di Firenze in Florence, the Gran Teatre del Liceu in Barcelona, the Palau de les Arts Reina Sofia in Valencia, the NHK Hall in Tokyo, and took part in the closing ceremony of the 2014 Winter Olympics in Sochi.

However, chamber lyric singing, another side of the remarkable singer’s talent, has never been behind the scenes for her true fans. When Hibla Gerzmava was a contestant at the Tchaikovsky Competition, she received a special prize for her performance of Tchaikovsky’s Lullaby.

The singer’s new programme fully unveils a vivid and rich period of Russian music of the late 19th and the first quarter of the 20th centuries. Hibla Gerzmava is accompanied by pianist Yekaterian Ganelina, an Honoured Artist of the Republic of Abkhazia and an owner of many diplomas as the best concertmaster of prestigious international competitions, who has performed with the singer in Russia and abroad for many years now.