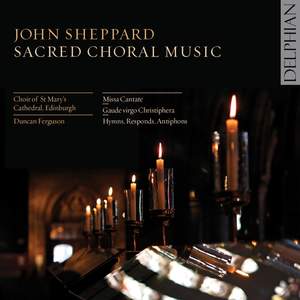 Perhaps the most striking feature of this recording from the Choir of St Mary's Cathedral Edinburgh is the way in which the trebles seem perfectly integrated within the ensemble...The rest of... — Gramophone Magazine, April 2014 More…

Following Gramophone Editor’s Choices for their recent excursions into the sacred music of Bruckner and of Gabriel Jackson, Duncan Ferguson and the Choir of St Mary’s Cathedral, Edinburgh return, in their fourth disc together, to the epoch of their first recorded triumph, the early 16th century. Their 2010 Taverner disc won plaudits for its exhilarating freshness and panache and the choir bring the same musical and liturgical integrity to music by Taverner’s near contemporary, John Sheppard, Informator Choristarum at Magdalen College, Oxford (where Ferguson himself was a more recent organ scholar).

Centred on Sheppard’s most extended and ecstatic composition, the 'Missa Cantate', this wide-ranging collection also includes the rarely-heard 'Gaude virgo Christiphera', Sheppard's only surviving votive antiphon (with a new reconstruction of the treble part), and the first recording of 'Adesto sancta Trinitas II'. Most remarkable of all is the performance level to which Ferguson has now brought this choir, and the expressive force given to the music by the astonishing agility of voices in the vast cathedral acoustic.

Perhaps the most striking feature of this recording from the Choir of St Mary's Cathedral Edinburgh is the way in which the trebles seem perfectly integrated within the ensemble...The rest of the choir is equally well matched and solid, and the whole is recorded with admirable presence and clarity.

[Sheppard] is no mean composer. Here are beautifully shaped performances of the great Missa Cantate, the serenely luxuriant Libera nos, salva nos I and other works with rich and perpetually active textures.

these pieces show [Sheppard] to be fully the equal of Byrd, Tallis and Taverner. With its ecstatic, keening trebles layered over a densely woven bed of lower-register voices, 'Libera nos, salva nos I' makes a sublime short opener... 'Reges Tharsis et insulae' exploits the cathedral’s wonderful acoustics to the fullest

His fantastically elaborate Gaude virgo Christiphera suits the delightfully deft voices of St Mary's Cathedral, Edinburgh, as does another revelation: Hodie nobis caelorum rex...with a little choir of trebles and a tenor singing Gloria in Excelsis way off in the distance. Magical.

This revelatory disc offers compelling evidence that [Sheppard] has been grossly underrated... The polyphony is rich, the use of dissonance masterly, and great arches of music compellingly sustained...[the choir] sings with fervour and plangent clarity.