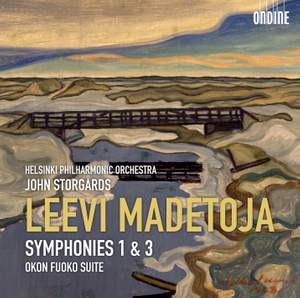 I. Okon Fuoko, the Dream Sorcerer

III. Dance of the Puppets

IV. Dance of the Man and the Woman: Dance Grotesque

This new release completes Ondine’s two-disc survey of Madetoja’s symphonies. Considered one of Sibelius’ finest contemporaries in Finnish orchestral music, Madetoja merges the landscape and folk songs of his native province of Ostrobothnia with a French elegance (Symphony No. 3) to create a unique voice.

John Storgårds and the Helsinki PO are widely celebrated both in live performance and recordings. Their release of Rautavaara’s Cello Concerto No. 2 (ODE 1178-2) was given the 2012 Contemporary recording prize at the 2012 Gramophone awards and the previous release in this series (Symphony No. 2) was described as being conducted with ‘sharp insight and unfaltering authority. Under Storgårds’ baton the impeccably prepared Helsinki Philharmonic exhibits their commitment to the music.’ (MusicWeb) with BBC Music Magazine awarding 4 stars for a ‘vividly performed’ recording.

This release includes the orchestral suite from the ballet pantomime Okon Fuoko. The work has clear affinities to Ravel and Prokofiev and reveals Madetoja’s modernism as a composer in the early 20th century.

The Helsinki performances are a touch more energetic and colourful than those of their Icelandic rivals on Chandos.

Madetoja's symphonies...are expertly crafted and melodically engaging works, not without moments of unaffected inspiration and genuine originality...What magnificent performances they receive here from Storgards and his top-drawer Finnish orchestra, which sounds world-class in all respects. Its superb playing is dramatically caught in this outstanding recording.

Clearly Storgårds is a maestro to watch...Storgårds’ scruff-of-the-neck readings should win new friends for composer and conductor alike.