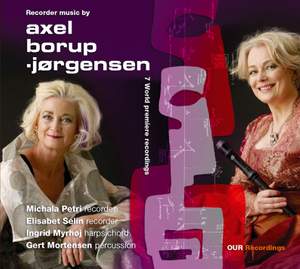 This recording presents Borup-Jørgensen’s complete works for recorder; a chronicle of a 30 year relationship that began when his daughter, Elisabet Selin became Michala Petri’s first and only private student. Over the years, Michala and Elisabet performed on a number of critically acclaimed recordings but none as special as this; as the artists for whom these works were originally composed, their interpretations are both personal and authoritative. Beginning with the Fantasia for sopranino recorder and harpsichord op. 75 from 1975 and concluding with Pergolato op. 183, composed the year before the composer’s passing, each work carefully explores the potential of the recorder as a melody instrument and as a source of new forms of acoustic expression.