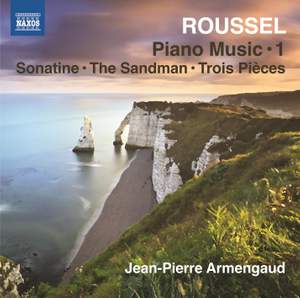 even [Casadesus and Cortot] could hardly have made a finer case for the composer than Jean-Pierre Armengaud, whose rich experience is reflected in well-recorded performances of outstanding vitality... — Gramophone Magazine, May 2014 More…

Albert Roussel forged a unique musical identity in his music and remains one of the most intriguing and influential of French composers. In this first of three volumes of his complete piano music one can hear his originality as early as the Sonatine, Op. 16, composed in 1912 where fantasy and atmospheric colour are prominent. Le Marchand de sable qui passe, Op. 13 (The Sandman) is incidental music written for a verse play where the influence of Debussy and Wagner can sometimes be felt. Roussel’s last creative phase, represented by Trois Pièces, Op. 49, reveals his incisive wit, rhythmic vitality and jazzy turns of phrase.

even [Casadesus and Cortot] could hardly have made a finer case for the composer than Jean-Pierre Armengaud, whose rich experience is reflected in well-recorded performances of outstanding vitality and expertise.