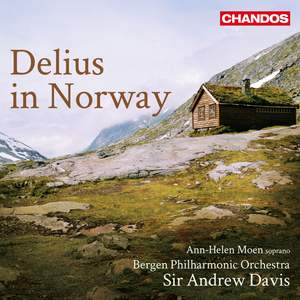 A string of orchestral and vocal works inspired by the composer’s love for the landscape of the Scandinavian country — Financial Times, 25th January 2014 More…

Delius: Paa Vidderne (On the Mountains)

I. Prelude to Act I. Con moto - Molto tranquillo

II. Interlude between Acts I and II. Con spirito - Allargando

Delius: Two Pieces for Small Orchestra: I. On Hearing the First Cuckoo in Spring

Sir Andrew Davis and the Bergen Philharmonic Orchestra perform in this release which celebrates the relationship of Delius with his spiritual home, Norway. It features works inspired by the country’s landscape and culture, many bearing the influence of Delius’s great friend and mentor Edvard Grieg. Delius first performed Sleigh Ride on the piano to a close group of friends, including Grieg. Orchestrated later under the title Winter Night, it went on to become Delius’s most popular miniature. The Norwegian Suite was commissioned as incidental music to the satirical play Folkeraadet. Delius’s clever use of the Norwegian national anthem throughout the score, however skilful, was seen as an insult to national sensibilities and uproar ensued, eventually forcing Delius to withdraw the music. Eventyr, translated as ‘Tales of Adventure’, evokes the spirit of Norwegian folk-tales. Delius applies some of his most imaginative orchestral strokes as he portrays a supernatural world of trolls, giants, demons, and pixies. Despite its brevity, On Hearing the First Cuckoo in Spring is one of Delius’s sublime achievements, a perfect translation of nature and mood into music. Norwegian soprano Ann-Helen Moen joins the orchestral forces in Two Songs from the Norwegian.

The Bergen Philharmonic play with elan, Davis clearly knows his Delius and Chandos's sound is superb.

the quality of the sound reproduction is ideal and the enthusiasm and dedication of the Bergen Philharmonic Orchestra and their conductor Sir Andrew Davis is palpable...this programme has been lovingly chosen by Chandos: it is a superb selection that showcases the deep affection Delius had for Norway, the composer’s absorption of its culture, and finally his friendship with Edvard Grieg.