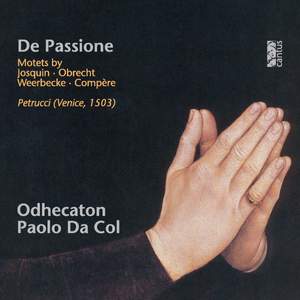 In May 1503, Ottaviano Petrucci, inventor of music print, published in Venice a collection called Motetti De passione De cruce De sacramento De beata virgine et huiusmodi, which he marked with the letter B (Motetti B, since it was a second group of motets). Among the Northern composers represented in Petrucci's anthology we find the names of Josquin Desprez, Jacob Obrecht, Loyset Compère, Gaspar van Weerbecke and Heinrich Isaac, all Franco-Flemish, the famous oltremontani singers recognized in Italy as pre-eminent in the compositional technique of vocal polyphony, the "true masters of music," according to Francesco Guicciardini.

The title of our own collection of motets on this CD refers to two large and homogeneous motet cycles included in the 1503 collection (Officium de Passione and Officium de Cruce). It also refers to the main religious themes represented and to the obvious liturgical destinations of many of the other works selected. Some of the motets may have accompanied the ceremonies of Holy Week; others, the liturgy of Corpus Christi (Motetti de Sacramento), while others would be used for Marian devotion (Motetti de Beata Virgine) and others could be used in different liturgical times. It is a sublime music, of a stunning expressive power in which homophonic style, in chords, dominates, underscoring the lacerating nakedness of the a cappella polyphony.

Odhecaton, the wonderful Italian vocal ensemble directed by Paolo Da Col, is undoubtedly one of the most extraordinary vocal ensembles in the world, with lots of international awards that crown their recordings to their impressive credit. Their performances are an exquisite blend of the expressive fervour, the amazing declamation of the text that has become their fingerprint, and their undeniable technical powers. In their first album for Cantus they offer readings of a breathtaking beauty: a dazzling version of Josquin's Miserere mei, Deus or an impressive recreation of Compère's Officium de Cruce are just two examples of the unique way and purity seldom heard in which Odhecaton performs this doleful Passion music.

The CD is rounded with the intervention, just before Josquin's Miserere, of Clara Murtas, a Sardinian folk singer invited to deliver a heartbreaking Lamento de la Madonna, contrasting yet completing so movingly the 15th-century polyphony pieces.artistic level. We believe it will become a benchmark in the early music discography.