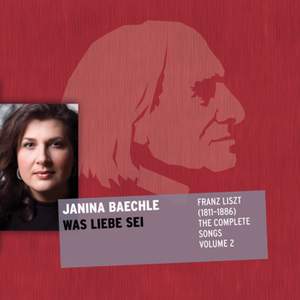 This second release in an edition dedicated to the lieder of Franz Liszt features German mezzo-soprano Janina Baechle and English pianist Charles Spencer. The pianist of choice for the whole series, Spencer has the distinction of having been the last accompanist - for 12 years - to the great mezzo Christa Ludwig. Although Liszt is primarily considered a virtuoso pianist par excellence and influential composer of symphonic epics as well as piano pieces, his lieder offer the essence of his entire oeuvre. A master of melody, many of his lieder are captivating for the beauty of their vocal parts, but it’s the expressive quality of his music that brings them to life so delightfully.

Best-known for her performances with the Vienna State Opera, Janina Baechle is an immensely talented artist with a rapidly rising profile around the world. Her voice has been described by German publication Der Western as having “a wonderful timbre, shimmering like glowing velvet with radiant high notes”.