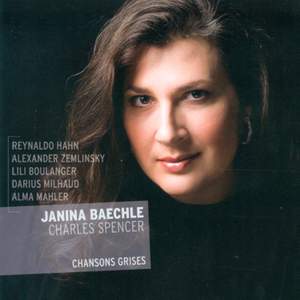 ‘Chansons Grises’ was Janina Baechle’s debut album as a recitalist. Cited as one of the great mezzo-sopranos of our time, this superb disc of 19th and 20th century songs by German and French composers more than qualifies such a description for the German singer. Most of the songs - by Reynaldo Hahn, Alexander Zemlinsky, Darius Milhaud, Lili Boulanger and Mahler’s wife, Alma - are little known, making this well-chosen recital even more enticing. An important moment in Janina Baechle’s life was when she met much-sought-after accompanist Charles Spencer who performs with her on this disc. The Yorkshireman was Christa Ludwig’s accompanist for 12 years until her farewell tour in 1993 and he passed most of her song parts to Janina. Among the other singers he has worked with are June Anderson, Gundula Janowitz, Marjana Lipovsek, Jessye Norman and Thomas Quasthoff.