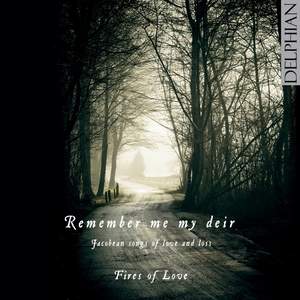 Offer, Remember me my deir: Jacobean songs of love and loss

The Scottish airs often bear traces of dance-like elegance, well suited to the lustrous tone of Frances Cooper, whose hauntingly beautiful sound is one of the chief delights of the recording. — Early Music Review, February 2015 More…

anon.: And Will He Not Come Again?

anon.: In throu the windoes of myn ees

anon.: Remember me, my deir

Johnson, J: A Dump or The Queenes Treble

anon.: How should I your true love know

Campion: The Cypress Curtain of the Night Is Spread

anon.: I Long For Thy Virginitie

anon.: And Will He Not Come Again? [John Sturt manuscript]

Scotland’s troubadours, the Fires of Love, follow King James VI on a varied journey through song and instrumental music. In the 16th century Scotland appeared outwardly to be musically bruised – not necessarily so … As our musicians deftly weave their way through Scotland’s rich tapestry of historic manuscripts, they unveil attractive unsophisticated melodies, often heavily imbued with the French style.

On their arrival in London, James and his musicians would have been taken aback by the highly active theatre scene. Shakespeare’s texts give rise to compelling settings, from the plaintive 'And will he not come again', poignantly rendered here by Frances Cooper, to the risqué joviality of St Valentine’s Day.

As the Scots courtier-musicians nimbly traded French influence for London’s ‘Englished’ Italian style, one wonders: did they regretfully look homewards: 'Remember me my deir?'

Based in Scotland, Fires of Love has been performing in venues and festivals around Britain since 1998. The repertoire centres on lute and guitar songs, set amongst instrumental ensembles, solos, recent discoveries and the group’s own arrangements. The music spans the breadth of Europe and instruments include lutes, archlute, theorbo, vihuela, baroque guitar, fourcourse guitar, recorders and percussion. The group has made two previous recordings for Delphian: 'Love and Reconquest: Music of Renaissance Spain' (DCD34003) and 'Chansons à Plaisir: Music from the time of Adrian Le Roy' (DCD34063), both released to high critical acclaim.

The Scottish airs often bear traces of dance-like elegance, well suited to the lustrous tone of Frances Cooper, whose hauntingly beautiful sound is one of the chief delights of the recording.

Rather than clamouring for attention, individual tracks contribute to a single unfolding arc of musical narrative...There's a sense of eavesdropping on something private and intimate, so delicately understated are the performances.

The performances are gentle, intimate and never less than beguiling.

The greater sophistication of the early 17th- century English composers must have shocked the Scots musicians, but it’s to the quartet’s credit that the two strains blend seamlessly here.