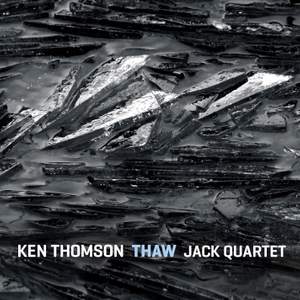 When Brooklyn-based clarinetist, saxophonist and composer Ken Thomson prepared to sit down and write the music for THAW — his Cantaloupe Music debut — he literally needed to “thaw out” by leaving town. “One of the hardest things to do in New York City is compose,” he writes in the CD’s liner notes. “In the winter of 2011, I decided at the last minute to find a cabin in New York state, hole myself up there, and start writing. I spent days writing music, watching the snow and ice fall around me. I didn’t complete the quartet there, but the impetus behind all the movements started then.”

What he ended up with was a four-part suite that melts, liquifies, re-freezes and realigns the composer’s demands on the traditional string quartet, making THAW (which pairs the title composition with “Perpetual,” for string quartet and bass clarinet) a project that only the famed JACK Quartet could tackle. Known for their ability to lend a palpable sense of electricity to the most complex pieces by such composers as Iannis Xenakis and Georg Friedrich Haas, the four members of JACK have built up a mind-meld of instinctive communication over the years, drawing the attention of everyone from Derek Bermel to Vijay Iyer to John Zorn and more.